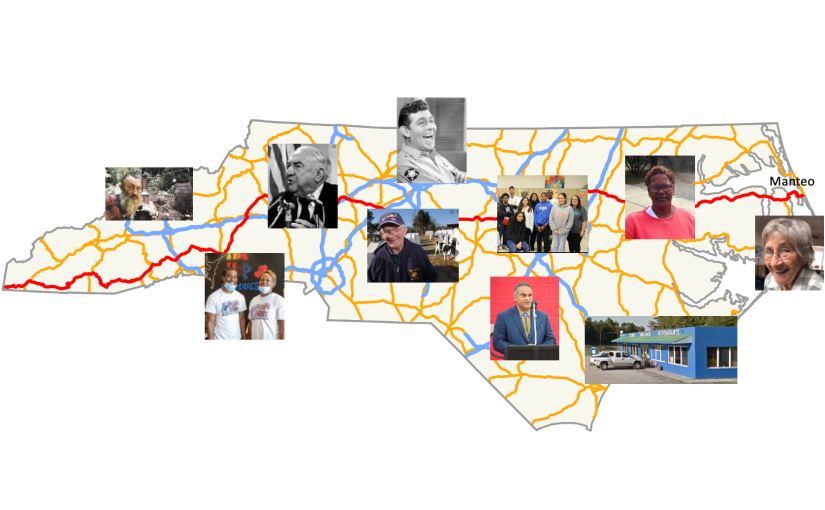 I read the Kindle edition which has all the photos and links to audio and video samples.

North Carolina has as rich a diversity of dialects of English as any linguist could hope to find in the U.S. say Walt and Jeffrey, two linguistics professors at North Carolina State University. They ought to know, having conducted thousands of interviews all across the state from Matteo in the east to Murphy in the west, as part of the North Carolina Language and Life Project.

Their book aims to give those not trained in linguistics an idea of just how diverse Tarheel speech is and to show how history, geography and culture have shaped the way residents of the state talk.

I grew up from age five to twenty-one in a college town in the Research Triangle within the North Carolina Piedmont. In that time, I was exposed to a large sample of the various regional dialects, from the local kids around town and the ones from further out in the country, who attended to schools in town. I ran into more diversity traveling from the mountains to the coast, with my family, my friends, their families and the Boy Scouts. Later, I worked summers with a variety of custodians, construction laborers, mailmen and others, black and white, old and young. As upper middle-class southerners, my family employed African American maids and babysitters, as did my grandparents and my friends’ parents. This was the era just before full integration of North Carolina’s public schools, so I had only token contact with African American speech there.

My first significant contact with Spanish speakers was when I went to college for two years in New Mexico. North Carolina had only a tiny population of Hispanics then. That changed rapidly in the 1990s, and it profoundly affected the area where my father grew up, and where I still own a piece of the family land. The explosive growth of the hog farming and pork packing industry brought hundreds of Mexicans and Central Americans to the little tiny town that I had known since I was a child: besides the farms and packing plants, a world-famous garment factory employed Hispanic women for their sewing skills. Spanish stores, a pool room and restaurants reoccupied the increasingly deserted main street. On the corner near our land, a derelict country store was made into a very authentic Mexican restaurant, an oasis in what had become essentially a food desert.

My father’s family is from the southeastern corner of the state. My mother’s family, though, is from Ohio, and I lived from ages two through four in Minnesota, so my earliest linguistic influences from family and playmates were only partly “southern.” Thus, most people I meet don’t recognize me as a southerner by my speech. Interestingly, of my four younger siblings, my two sisters show the most pronounced North Carolina accents, and both have a greater tendency to use such characteristic expressions as “you all.” All of them learned to talk while living in N.C. and they are ordered brother – sister – brother – sister, so it’s not a matter of age. It seems perhaps to be a question of peer interactions, but I’m not sure why it worked out like that.

There’s more to this as well: my father had only moderate traces of his rural southern upbringing in his speech, although his five siblings (one brother, four sisters) all had stronger accents. My paternal grandfather (born 1869, died 1965) also lacked very strong rural North Carolina speech, although his wife, who was from Virginia, certainly sounded “southern.” Perhaps education was a factor: both father and grandfather attended the University of North Carolina, as well as other schools. Class was also a factor, perhaps, both were medical doctors.

One trace of regional speech that I noticed in my father and grandfather was a slight broadening of certain vowel sounds. This was more memorably apparent to me in my great uncle, whom I saw often while growing up. He was college educated also, but he attended NC State College (as it was then called). Fans of the teams of other schools referred to it as Moo U. This may have reflected a perceived, possibly real, difference in social class from those who went to Duke and UNC. At any rate, when my great uncle pronounced the word “pond,” it came out as “pawned.” I have wondered whether this was a feature carried over from the speech of my great great great grandfather, who came from Orkney, Scotland, to North Carolina in the 1760’s. He was a late participant in the migration of Scots to North Carolina, and I don’t think that Orkney speech was exactly like that of the Scots-Irish or the Highland Scots who came earlier. My ancestors came to Orkney, probably from the Black Isle on the southern edge of the Highlands, as early as the fifteenth century.

I picked up over the years a couple of other curious tidbits that suggest the persistence of early ancestral immigration: one was my grandfather telling us that, “If it rains on Saint Swithen’s day, it will rain for forty days.” (https://en.wikipedia.org/wiki/Swithun) The other is the use of the name “didapple,” pronounced “die-dapple,” for a pied billed grebe. I heard this from the son of one of my father’s childhood friends, as we stood beside their large millpond, looking at various birds. This appears to be a variant of the name dive-dapper, used by Shakespeare in Venus and Adonis.

Talkin Tarheel is a rich tapestry of similar history, culture, and personal stories, all showing how people came to talk as they do and how those distinct dialects are evolving in the twenty-first century. As the authors are constantly emphasizing, no language is ever static, least of all one in a place undergoing rapid demographic and economic change. Old ways of living and speaking are disappearing, such those of the “hoi toiders,” from the Outer Banks and of the mountain folks, like the last of the old-time moonshiners. These dialects are in danger of being lost as living speech. Both these groups feature in several sound and video clips from the Language and Life Project.

Other groups are very unlikely to lose their distinctive forms of speech, although they to are changing in response to growing urbanization, mass communication and other factors. I first heard of the Lumbee Indians back in 1958, when I saw the headlines about the battle they fought against the KKK at Maxton (https://en.wikipedia.org/wiki/Battle_of_Hayes_Pond) This story is rightfully excluded from a book that tries to include and value all North Carolinians (not the Klan as such, of course, but the rural whites, who might be unfairly associated with that detestable group). I was very happy to read that the Lumbee are doing well, and that they maintain their own dialect of English proudly. At 55,000 enrolled members, they are the largest population of Native Americans East of the Mississippi, though they have yet to receive the federal recognition they deserve. It is unfortunate that almost no trace of their original language can be found, unlike the much smaller Cherokee tribe, who still live in the western mountains and who are working hard to keep their language, famously given written form by Sequoia, alive.

There are many stories of African American history to accompany the discussion of their dialect (or dialects, as there is an increasing urban vs rural difference). Freedom Hill, on the Tar River, was incorporated as Princeville, making it the first African American town in the U.S. There is a wonderful clip telling of the struggles of Princeville to survive in the face of floods from recent hurricanes. Even if, like me, you don’t like to see rebuilding in flood prone areas, it’s impossible not to admire Princeville’s community spirit. Likewise, there is an interesting account of the Freedman’s Colony on Roanoke Island, the place of Lost Colony fame. When I go there again, I must visit the museum display that tells its story.

Talkin Tarheel is full of fascinating linguistic detail, showing how much the application of painstaking scientific techniques can illuminate even very subtle distinctions among dialects, such as the tendency of Hispanics to retain the syllable timed pattern of Spanish when speaking their dialect of English, unlike the stress timed pattern used by most English speakers.

The authors conclude with a celebration of the diversity of dialects in North Carolina and express the hope that through efforts like the North Carolina Language and Life Project, linguistics can help erase the stigma and prejudice that distinctive speech too often evokes and instead appreciate the variety of ways of Talkin Tarheel.

This post is dedicated to the late, much missed, MEB, who loved language and loved teaching and defending the interests of her young, immigrant Hispanic students in Alamance County.