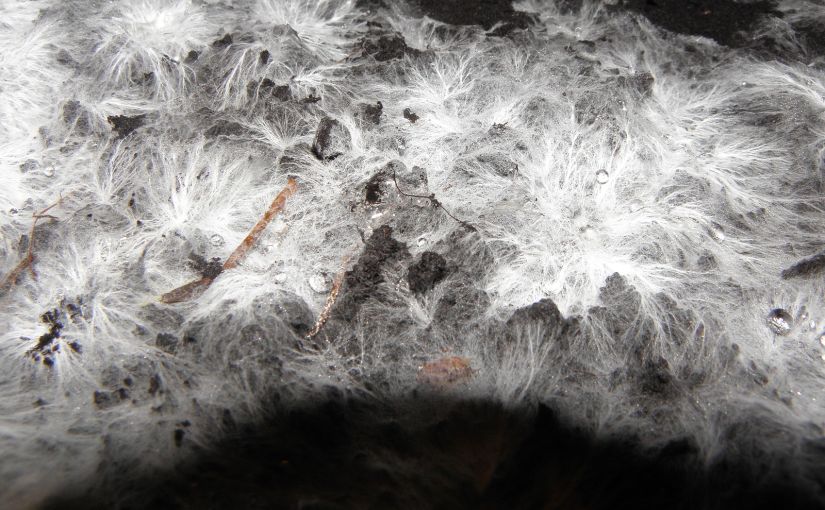 Image: Agaricus bisporus mycelium. Rob Hille. 9 December 2011 from Wikimedia Commons
I would describe this as a tantalizing book. Merlin Sheldrake writes in the mode so common to current popular science books, breathlessly exclaiming that these discoveries change how we think about everything. Boiled down, his message is that fungi created the world we know and continue to underpin its foundations. The case he makes is no better and no worse than most such claims, which I suspect every editor for publishers of nonfiction books tries to attach to every work that crosses his or her desk. Much of what Sheldrake describes is new looks at well known phenomena: the section on psilocybin mushrooms and LSD, for instance. It offers glimpses of a deeper understanding of what the chemicals fungi do to animal nervous systems, but reaches no firm conclusions.

It offers a lot of new information and speculation on the myriad roles that fungi have come to play in the biosphere, and a bunch of interesting potential applications to human problems (you can make, among many other things besides antibiotics, beer, wine and bread, fungal dog biscuits (Mutt-rooms)  and packing foam) He also discusses mycoplasma-remediation as a solution to contaminated sites from oil spills to herbicides. They will even break down discarded cigarette filters.

Interesting as these things are, they are not, in my view going to fundamentally alter our view of life.

Nevertheless, this is an enjoyable book. Sheldrake knows his fungi from intimate experience, and he writes well, except for the occasional hyperbolic outburst or awkward analogy. He explains a lot of exciting new research using DNA sequencing, tracer analysis and ingenious lab experiments to understand the role that fungi play in terrestrial ecosystems as decomposes, parasites and symbiotic partners with plants and each other. He spent many hours himself, doing down and dirty work in the forests of Panama, following the roots of a tiny mycoheterotrophic plant and the mycelial network of its fungal associate. He also talked to a wide range of fungus researchers in fields like anthropology as well as biology and shares their insights into the roles fungi play in nature and culture. Some of the most interesting characters are the fungal enthusiasts – mushroom freaks, one might say, truffle hunters and entrepreneurs working to create products from fungus ranging from ersatz leather to bricks. I like this better than 3D printing, with its inputs of resins, metals etc. Also I doubt you can make a fungal firearm at home.

I wish he had been even more comprehensive: for instance he says little about fungi and human illness. His discussions of fungi and food omit such important staples as tempeh. He talks a little about his own work on mycotrophy, but doesn’t mention the possibility that plants may be able to survive mycotrophically when competitions squeeze them out of the struggle for light. How else is it possible for plants in the New Jersey Pine Barrens, like turkey beard (Xerophyllum asphodeloides) pine barrens reed grass (Calamovilfa brevipilis) pine barrens gentian (Gentiana autumnal) and maybe even scrub oak (Quercus ilicifolis) to appear so quickly after fire, after a long interval since the last fire and no individuals could be seen in the unburned forest? Do their mycorrhizal root systems simply live off their fungal partners until a burn clears the space for them to send up shoots, leaves, flowers and fruits?

What do fungi tell us about life in general, if anything? His theme is interconnectedness. The title echoes Darwin’s image of the “entangled bank.” He frequently repeats the view that life is less about individuals than about networks of interaction and exchange, some mutually beneficial, some exploitative, some switching back and forth depending on circumstances. Like like Lynn Margulis, discoverer of the symbiotic origins of cellular organelles and the authors I discussed in my previous post Looking for the Logos of Life VIII: Organism and Superorganism, Sheldrake questions the reality of individuals.

Why the determination to shatter us into fragments? Whatever I mean by “I” doesn’t include the microbes indigenous to my body. I am not them, and it’s arguable whether I am even the parts of my body that are the result of the form encoded in the DNA I got from my parents. When I think of the Pythagorean theorem, it isn’t a soggy collection of bacteria doing that, or sharing in the contemplation. [??] The scientists want to abolish me entirely or reduce me to an aggregation of trillions of cells, of diverse descent. Meanwhile the social theorists would reduce me to nothing but culturally determined categories: white, male, middle class, straight, cis gendered, etc. But what I think about I’m free to select from a vast web of tradition both ancient and up to the minute, delivered to me in multiple modes. That’s the most relevant entanglement: the mycelium of ideas. It’s in the tangled network that is my brain, but it is there because I chose to attend to those ideas as they came to me and because I made the effort, sometimes racked my brain, to connect them to what was already there.

Anyway, fungi are amazing enough in their own right: in their chief domain, the soil, they are virtually sovereign, with allies like bacteria and the numerous arthropods, earthworms, nematodes, etc, that shred and stir the vast amounts of dead plant material that enter their realm every year. Constantly grazed by animals, they regenerate at phenomenal rates in every cubic centimeter of dirt. Without them, dead plant material would pile up, as it does in bogs, where lack of oxygen excludes them. Carbon would be locked away and CO2 levels would fall to the point of global cooling, as they did in the  Permian ice ages, which followed the Carboniferous age of coal formation.

In his ecological classic, The Biosphere, V. I. Vernadsky talked about the speed of life – the rate of expansion of a disk of cells, imagined as multiplying to cover the earth. Sheldrake makes an even more startling calculation: according to his reckoning, if all the fungal hyphae that have been produced were laid end to end, they would extend further than the limit of the visible universe, i.e. they would have expanded faster than the speed of light. Even though this is a bit like saying that if one airplane can fly from New York to Los Angeles in five hours, two can make it in two and a half hours, it’s still a remarkable image. It gives some hint just how ubiquitous and prolific fungi are in our world.