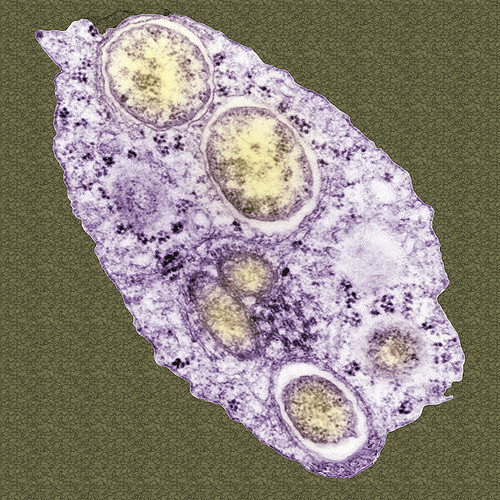 I Contain Multitudes: The Microbes within us and a Grander View of Life by Ed Yong. Harper Collins. 2016.

IMAGE: Wolbachia inside an insect cell

Who are we really? A question with a thousand answers, one being that we metazoan animals are large collections of cells, descended from a single fertilized egg cell, and organized into tissues, organs and systems, forming an individual. But, like any other object that contains nutrients and and energy ( and we contain a lot of both) we are also a good habitat for other kinds of living things, especially small, unicellular ones. In fact, there are more cells in our body of other kinds, with different DNA and different ancestry, than there are human cells. Most of them live in our intestines, but there are lots in and on every surface exposed to the outside, from our scalp to our toes.

What are they doing? Until 1676, when van Leeuwenhoekdescribed seeing microbes for the first time, we knew nothing of these guests on and within us (nor our own cellular structure) Cell theory did not become a standard tenant of biology until the mid-nineteenth century, and the germ theory of disease followed decades later. For a considerable period after that, microbes enjoyed very bad press, but it gradually emerged that these organisms were in fact mostly benign and possibly even essential to our well being.

We are not alone, of course: microbes are everywhere on and in plants and animals, including in microbes themselves. This book nicely recounts what has been learned about the manifold, complex ways microbes, especially bacteria, are woven into the fabric of the biosphere.

From the way bacteria form the luminescent organs of squid to how the sugars and antibodies in mothers’ milk regulate development of human infants’ digestive and immune systems, nourishing some bacteria and discouraging others, Yong shows the many ways animals depend on symbionts.

With the development of fast and cheap genome sequencing techniques, we can now characterize the microbiome, as it is called, for many organisms in detail. What has emerged is what Darwin described in his famous image of the tangled bank: an intricate network of ever evolving relationships among multitudes of actors, all struggling to survive and replicate under varying circumstances. Since we also know that gene sequences are exchangeable, just like energy and nutrients, from one organism to another, it is not too surprising to read of frequent exchanges among the microbes and sometimes between them and their hosts.

We also know, thanks to Lynn Margulis, that we still carry the highly evolved symbionts that first came together to build our eukaryotic cells from prokaryotic bacterial cells, a billion and more years ago. Our energy transforming mitochondria are the best known example, along with plants’ chloroplasts.

Not all relationships are benign: apart from acute and chronic infections, some fatal, there are lots of suggestive associations between for example, gut microbes and obesity, autoimmune disease and cancer. But at least we aren’t insects or worms, who frequently have their tiny lives disrupted by the almost ubiquitous Wolbachia, a bacterial symbiont that can twist their sex and reproduction in bizarre ways, but in other cases provides essential nutrients the host can’t make or facilitates the bugs’ own parasitic relations to plant or animal victims.

All this has practical implications, of course. If we could understand the workings of our relationships to microbes, we might be able to control some of the pathologies mentioned above. We might be able to provide better alternative nutrition for infants whose mothers can’t or won’t nurse them. We might be able to modify other organisms or build artificial ones to better suit our needs (see the review of Underbug in Science) for chemicals, food, etc. Of course, a little knowledge can be a dangerous thing, as witness the current interest in “probiotics,” whose benefits are largely unproven, or the even grosser move to fecal transplants. I’m not sure we are ready to safely manipulate our own microbiomes yet.

On a sounder footing, there are pilot studies of using Wolbachia to control the spread of dengue fever by mosquitos. Wolbachia prevents mosquitoes from carrying the virus, so releasing Wolbachia infected mosquitoes has been successful in reducing transmission of the disease. On the other hand, using antibiotics to kill symbiotic Wolbachia that enable filariasis worms to attack humans has resulted in the first successful treatment for elephantiasis.

The key thing, as my microbiologist father passed on to me from his idol, Theobald Smith, is to understand the ecology of the symbiotic relationship. In the Wolbachia-filaria relationship, there is a bit of love hate. Specifically, the worm has to have its own ways of stopping Wolbachia from becoming a parasite instead of a mutualist. If we could learn to manipulate those natural controls, we might have a way to trick the worm into eliminating Wolbachia and hence, ending its own ability to survive in its human host. Then even people who can’t take a long course of powerful antibiotics could be cured.

So much for the practical implications, of which these examples are just the tiniest hint. What does this new understanding tell us about the logos of life? Are there profound consequences for our self understanding in the realization that we contain multitudes?

I think that nothing here undermines the basic Darwinian conception of evolution by natural selection. Exponential growth (resulting in a struggle for existence) and genetic variation in populations lead to natural selection within these communities of organisms. The question seems to be what are the units on which selection acts? In the case of symbionts transmitted from parent to offspring and that can’t be expelled, it is likely, as is obvious with mitochondria, that the partnership as a whole must be what is acted on. Where the partners are acquired from the environment and can be lost and replaced, it seems to make more sense to think of coevolution, with each as a component of the environment of the other.

It’s reasonable to think that there must be a spectrum of such relations from purely casual and opportunistic to completely integrated. Is there a tendency for relationships to evolve towards complete integration? Lynn Margulis seemed to think so; she believed that such symbiogenesis was a more significant phenomenon than natural selection. I think that the logic of the process indicates otherwise. Self replication is the fundamental process; integration occurs when divergent lineages converge because of mutual advantage in the struggle for existence.

The accompanying loss of independence doesn’t matter. Very few organisms are totally independent of others, although recent work suggests there may be more than we suppose, at least where symbiotic microbes are concerned. Research suggests that most animals are parasites, if we include plant parasitic herbivores, and so they require a host or hosts to survive. Even scavengers and plants rely extensively on fungi and bacteria to release nutrients. Many fungi, in turn, are dependent on symbiosis with plants. That’s probably the main lesson here: the biosphere is a web of interdependent organisms, and the best way to live is with as much help as possible. As Red Green says, “we’re all in this together.”

Note: Underbug: An Obsessive Tale of Termites and Technology by Lisa Margonelli, Scientific American/Farrar, Straus and Giroux, 2018, also deals with symbiosis and the lives of some of the most socially integrated of organisms, the termites. Termites provided some of the earliest studied examples of complex symbiotes: the amazing protists in their guts possess a whole array of bacterial symbiotes themselves that enable them, and hence the termites, to digest wood. The so called advanced termites have gone another route, letting gardens of fungi in their giant nests do the work of digestion, just like the equally remarkable leaf cutter ants.

This book deals mostly with the many lines of research inspired by termites, more so than the details of their ecology and evolution. Still, it is a fascinating story about how we humans are expanding our own possibilities by looking closely at complex organisms. For more, see the review in Science.

2 thoughts on “Looking for the Logos of Life VIII: Organism and Superorganism”