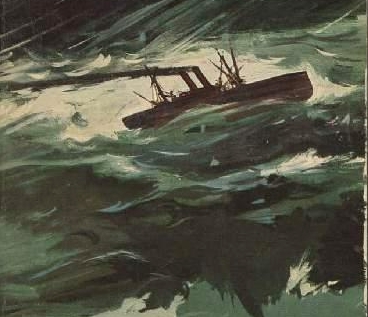 Jasanoff’s biography is both an appraisal of Conrad’s career as an author and the influences on his life and work of the rapid global expansion of commerce and imperial ambition in the second half of the nineteenth century. She describes his childhood in partitioned and occupied Poland, where his father was a idealistic revolutionary, exiled for much of his life. Conrad was inspired to go to sea at age sixteen after reading, among other works, the seafaring novels of James Fenimore Cooper, which I did not realize the author of Leatherstocking Tales had written. He eventually made his way to England, at that time the country most open to expatriates and the greatest maritime power.

Rising through the ranks of the merchant navy to become a licensed master, he voyaged across the globe, but mostly to Australia and Southeast Asia, mostly on sailing ships or the lesser steamers, rarely having the opportunity to serve on the better classes of fast passenger ships. When he began to write and publish his own stories, they were set in the locales familiar to him, aboard ships at sea or in the ports and backwater towns and villages of the great Asian archipelago. He focused on sailors and on the various exiles, dreamers of wealth or those escaping the past, who found their way into the remote places where they encountered indigenous rulers and other adventurers in constant conflict, much of it driven by the outside forces of expanding trade and European imperialism. His one trip on the Congo provided the framework for his most famous and controversial work, The Heart of Darkness. There he saw firsthand how the unbridled force of European greed brought out the savage potential of nearly everyone who became involved in the enterprise.

Conrad did not like to be thought of as a writer of sea stories, although he certainly wrote vivid and hair raising tales of the struggles of ships and crews, Typhoon being one of my personal favorites. He thought of himself as writing about the struggles of human beings, mostly, but not exclusively, men, caught up in the web of impersonal forces, both natural and societal that he saw driving the history of his times: oppression and the revolutionary impulse, personal ambition and political intrigue and the “material interests,” which he associated most powerfully with the United States.

Jasanoff does an excellent job of drawing out the threads that connect Conrad to our own day, arguing that more than any other author of his time, he saw and made his readers see the historical forces at work that we would now call “globalization.” Much has changed, as she is careful to describe from personal experience, both in material circumstances and our perspectives, but the seeds were present and can be perceived clearly in Conrad’s work. She herself, to gain first hand experience, made a river journey down the Congo, following the route of Conrad and his fictional Captain Marlowe, but she saw none of the darkness that they did, only poor but very enterprising people, making their way in a complex world, where bushmeat sellers from villages of bamboo houses buy toothpaste and batteries and watch satellite television showing European football matches. Some things she says, do not change much: the camaraderie of a long sea voyage (for her, on a giant container ship, following the long established route from Hong Kong to England) and the ravishing beauty of the dawn over a smooth sea.

Jasanoff sees Conrad as deeply pessimistic about human beings, carried along by winds and currents of history. Although we can master the literal forces of nature by our machines, we unleash consequences we cannot control, and the forces within ourselves are even less manageable. But, she says, Conrad does show us those times when however precariously, we can make choices that alter the course of ours and others’ lives. I find Conrad himself a clear case in point: in choosing to go to sea, the Polish boy, Konrad Korzeniowski became Joseph Conrad, master mariner and one of the greatest English novelists.