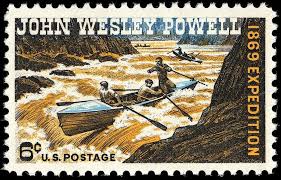 The Exploration of the Colorado River and Its Canyons by John Wesley Powell. Revised edition, published by the Smithsonian Institution. 1895. I listened to the Librivox version, by a very able group of readers.

I remember seeing the six-cent John Wesley Powell expedition commemorative stamp, when it was issued in 1969, but I never gave it much thought, except to notice that the steersman has only part of his right arm. I had learned somewhere, sometime, that he was the leader of the first United States expedition through the Grand Canyon of the Colorado. When I came across this account in the Librivox catalog, I thought I ought to listen to it, and I’m glad I did. This is the story of an epic journey told by an extraordinary individual.

Checking Powell’s biography on Wikipedia, I learned that by the time he was 25, he had rowed the entire Mississippi, Ohio, Illinois, and Des Moines Rivers and been elected to the Illinois Natural History Society. After his service in the Civil War (he lost the forearm at Shiloh) Powell taught geology at Illinois Wesleyan University. Along with his students and his wife, he made an expedition to Colorado to collect geological specimens.

His expedition, ten men in four boats, left Green River, Wyoming, on May 24, 1869, and reached the mouth of the Virgin River, at the lower end of the Grand Canyon on August 30, with two or three boats and six men. Three men had left to climb out of the canyon shortly before the end, because the expedition was dangerously short on food and still faced unknown risks on the river. As it happened, they were the unlucky ones: Powell later was told they were killed by Shivwits Indians, who believed they were part of a party that had  murdered some other Indians shortly before Powell’s men passed through.

Powell’s book reads like a journal and is based on the records he kept, but some later editing occurred, apparently. Whatever the case, it is a harrowing tale. One boat was wrecked early, and the rest were frequently capsized. Food was lost or spoiled by wetting, so by the end, they were in danger of running out. Many stretches had to be portaged round or the boats lowered and hauled through on ropes. That and the rowing made every day exhausting. At one point their fire spread into some driftwood and nearly incinerated them in a narrow alcove where they had camped. Powell and some of the others also made regular ascents of the canyon walls to take instrument readings, examine the landscape and scout ahead where possible. These involved rough and dangerous ascents of thousands of feet and tortuous scrambles through narrow slot canyons. This by a man with only one hand!

Perhaps the most disturbing aspect of the voyage was the uncertainty of what they faced ahead. Around the bends of the river, they were sometimes confronted by large falls or dangerous rapids, with little time to decide whether to go ahead and try to run them or make desperately for some safe stopping point. It seemed possible that they might meet an impassable obstacle at a point where they could not escape from the canyon. They could face a choice between starvation and near-certain drowning. Today, hundreds raft down the Grand Canyon, aided by years of experience, modern equipment and a flow now controlled by the Glen Canyon Dam. Powell’s trip was a plunge into the unkn0wn, Samuel Walter Foss’ opening lines for The Coming American “Bring me men to match my mountains,” could be applied to Powell and his crew, perhaps modified to “…men to match my canyons.”

His descriptions of the geology, the river, the landscape and vegetation are vivid and sometimes enthralling. The latter part of the book describes the trip he made in 1870 and 1871 back over some of the same ground, but visiting many of the Native Americans resident in the lands north of the canyon and eastwards to the Pueblos of New Mexico. These are also fascinating. He worked for the rest of his life as a geographer, ethnologist and administrator at the US Geological Survey and the Smithsonian Institution and was a strong advocate that development in the arid western states, should be carefully limited.