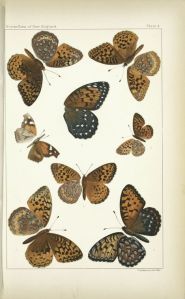 This book, beautifully illustrated, is a history of the discovery and documentation of the butterfly fauna of the United States and of the entomologists, amateur and professional, who fed the public fascination with butterflies in the 19th century – Samuel Scudder, William Henry Edwards, Herman Strecker, Augustus Grote, W. J. Holland, and many others. The author has many reflections on the importance of both Darwin and Romanticism (especially German) on the interpretation of the biology and meaning of butterflies. There is also a lot on the collectors, scientific and commercial, who travelled throughout North America and the rest of the world to satisfy the demand for specimens, often at considerable risk and always with much hardship. Butterflies and moths were much more than a scientific concern: there was a great deal of commerce in specimens, as many, if not most, young men of middle class aspirations had a Lepidoptera collection, even if few collected themselves. It is strange to think in our day of fancy cars, world travel and electronic devices, how much one’s status might have been tied up in various collections, whether, insects, stamps, shells or books.

Leach mentions George Santayana’s The Sense of Beauty several times as a perspective on the 19th-century’s fascination with natural form and color. As well as commercial specimens, large format books with color plates were an important part of the butterfly business. He talks about the illustrators and the changing technology of color reproduction.

The Academy of Natural Sciences of Philadelphia was one of the repositories of collections, including the very early and important Titian Peale collection, which was to have formed the basis of a never-completed series of books by that second-generation Philadelphia artist. The American Entomological Society, founded 1859, played a role as well. The society’s book collection, still housed at the Ewell Sale Stewart Library of the Academy, includes many of the most attractive 19th-century publications.

This is a fine account of what natural history meant to Americans in the first century and a half of the nation and of the friendships and rivalries among these early naturalists.

One thought on “For the Love of Leps”