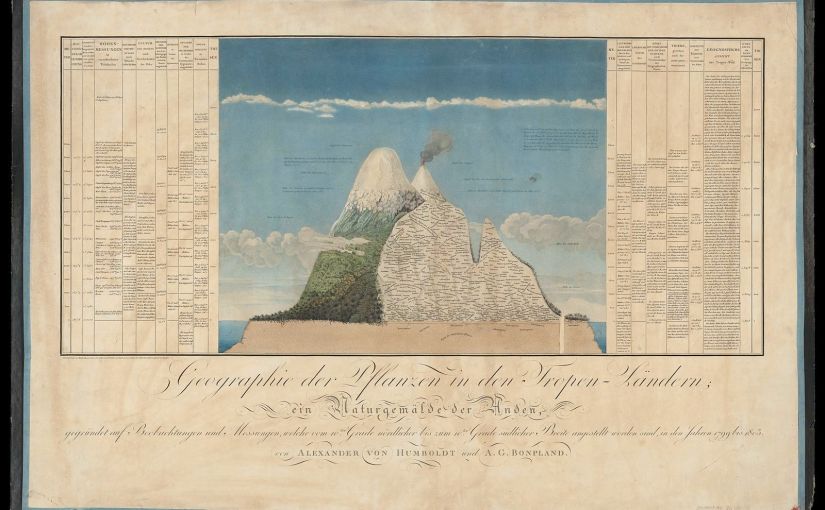 Essay on the Geography of Plants, by Alexander von Humboldt, and Aimee Bonpland. 2009 (1807). Edited by Stephen Jackson. Translated by Sylvie Romanowski. University of Chicago Press. Chicago. 274 pp with tableau in pocket
This book is pure descriptive natural history, with almost no speculation or discussion of causes. It is divided into Humboldt’s Essay of some 30 or 40 pages and the longer Tableau Physique prepared by Humboldt and Bonpland. Some of Von Humboldt’s fascinations, like barometric pressure, which he includes along with temperature, humidity and “electrical tension” as factors influencing plant distribution, seem peculiar to me, but I have to remember that he was much more limited in what he could measure than we are today. Another peculiarity is his notion of “social” plants, by which he seems to mean those that form dense monocultures as opposed to mixed stands. He says these live “in organized society, like ants and bees…” His examples include mangroves, Cladonia lichens and pines, but also Vaccinium. He notes that such plants are more common in the temperate regions than in the tropics. Mexico is an exception, harboring many temperate species, like pine, oak and sweet gum, which he attributes in part to the vast geographical expanse of the northern part of America, narrowing southwards. Somehow this causes Mexico to be colder than similar latitudes elsewhere. Then there is his idea of “subterranean vegetation,” which seems to mean fungi in caves and mines. He treats these “cryptograms,” alongside lichens and mosses. How aware was he of the fundamental distinction between autotrophs and heterotrophs? Photosynthesis was barely beginning to be understood in his time.
He also lacked a clear notion of geologic time, referring only to remote ages, but with no sense of the scope and significance of the fossil record. Only the epoch of human spread across the earth is accessible to his reflections on the distribution of plants. When compared to Graham’s Natural History of the New World, he has far less to go on, and barely any sense of the potential of fossils to shed light on modern plant communities and their distributions. Yet Graham clearly is following in the footsteps of von Humboldt and Bonpland.
One advance he makes is to point out the importance of physiognomy alongside taxonomy in describing communities of plants (another of his ideas) what we today commonly call life forms or growth forms.
The main thing, though, is the Tableau Physique, the profile of the Andes, using the volcano Chimborazo thought, at the time, to be the highest peak in the world. The detailed data packed into a single illustration is startling and quite beautiful. The other wonderful part is his concluding reflections in the essay on the value of natural history writing and artwork in elevating and liberating our understanding, even if we cannot experience these amazing places directly.